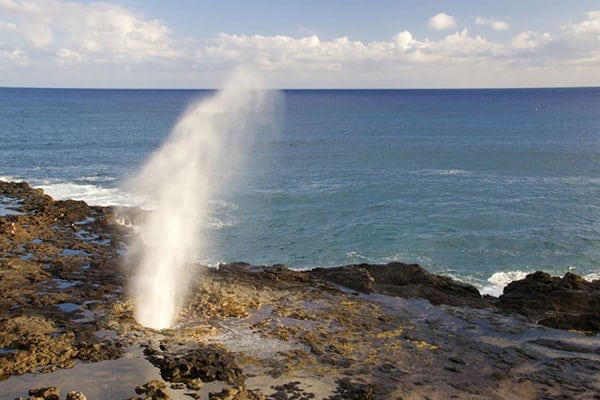 Spouting Horn Beach Park is a delightful lookout where you can watch a blowhole spout a plume of sea water into the air. This waterspout occurs whenever waves are forced under the lava shelf and up through an opening in the rocky coast. Depending on the tide and ocean conditions, the water may spout as far as 50 feet into the air. If the light is right, you may be able to catch a rainbow in the sea spray. You’ll also hear a hiss and a roar that is the basis of a Hawaiian legend.

One legend says that this coastline was once guarded by a giant moo (lizard) named Kaikapu. Everyone was afraid of the moo because it would eat anyone who tried to fish or swim in the area. One day, a young boy named Liko entered the ocean to outwit the lizard. Kaikapu attacked him, but Liko thrust a sharp stick into her mouth, swam under the lava shelf, and escaped through a small hole to the surface. The moo followed Liko and got stuck in the lava tube. To this day, you can hear the lizard’s roar and see her breath spraying from the blowhole.

Access to Spouting Horn Park is convenient with ample parking and the view from the lookout is luminous at sunset. The Poipu coastline is also a great vantage point to look for humpback whales during whale watching season from December to May.

There are local vendors set up here who sell crafts and jewelry. You may encounter an unexpected tropical treasure or keepsakes.